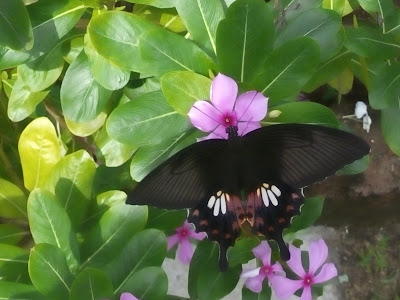 So this picture came as a luck. I was returning home. The rain had cleared and there was a brilliant sunshine. Just as I entered my garden, a beautiful butterfly was hovering the flowers in search of nectar. I didn't want to miss the chance. However when I reached the spot, the butterfly vanished only to emerge back to the place in few seconds. I immediately clicked. The picture was taken. Our wishes in search of nectar and beauty was pursued. I felt ecstatic.
Posted by Unknown at 07:41 No comments:

Let me tell you something you already know. The world ain't all sunshine and rainbows. It's a very mean and nasty place and I don't care how tough you are it will beat you to your knees and keep you there permanently if you let it. You, me, or nobody is gonna hit as hard as life. But it ain't about how hard ya hit. It's about how hard you can get hit and keep moving forward. How much you can take and keep moving forward. That's how winning is done!


There exists a thing between us, a thing which cannot be seen and touched but felt. Do u feel it? I'm feeling it now. The feeling is inexpressible yet it seems powerful than a magnet. The resonance hitting every wave creating a unison of overlapping rays. A feeling of contentment which arises not from mere physical presence but something beyond that, something higher, a feeling of achieving the sublime.
Posted by Unknown at 09:19 No comments: